Be sure to stay up to date on our socials Do you have a child struggling with separation anxiety? I know the helpless feeling it gives you as a parent all too well.Here's how I helped my son through it.


These are just a few of the topics that plague us as parents or parents-to-be. They are the  things we think about well in advance and try to prepare ourselves for and figure out how we’ll deal with them when they inevitably occur.

Separation Anxiety is often spoken about when referring to babies when leaving their primary caregiver, usually when the time comes for some form of daycare while parents return to work. Don’t be fooled, this can just as hard on the parents than on the child. I think every working parent has had ‘the guilts’ as they drove away those first few times and called every hour for an update on their little ones day.  Eventually they settle in and we relax knowing that they’re safe and actually have an absolute ball while we’re gone.


Most babies and children grow out of it within a couple of weeks but there’s no hard and fast rule on this, every baby/child is different. 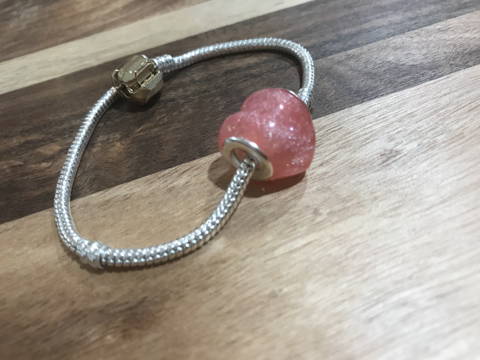 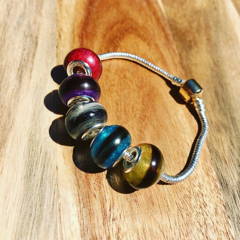 As a mum of 4 and grandmother to 1 I’ve had my fair share of ‘Mum guilts’. More than i care to admit. But the hardest was watching my 2 boys really struggle at times. My youngest son struggled the worst, because he did it in silence.


My 3rd child was 11 years old and in year 5 at school. He was happy, liked by everyone, confident, enthusiastic and just a great kid. I started noticing things here and there I tried to ask what was wrong and he’d say “nothing Mum, I’m ok and smile”. Oh dude, I grew you within my own body and have known you your whole life so let’s try that again. After talking about other random stuff for a bit he eventually opened up and shared that being at school was hard. Not because of the work, or the teachers or even the other kids.

As he spoke I just listened. Within 5 minutes he was in tears and said he felt silly because he just missed me. *cue heart shattering sound effect* It turns out he’d been going and hiding in the toilets at recess and lunch because he was so overwhelmed with emotion he’d cry and he didn’t want any to know because he was now in the senior classes at school and was a ‘big kid’. He didn’t want the other kids to know he just wanted to be with his mum. We hugged and both cried. I asked if he’d heard of the word ‘Anxiety’ before, he had not. We sat and chatted and I explained what anxiety feels like to me, that it can feel different for everyone but that most people agree they all feel similar things and we ran through a list I looked up on good old Dr Google. By the end he’d stopped crying and was sitting with a little more confidence at the realization that he wasn't ‘weird’ or ‘broken’ or a ‘wuss’ and that lots of people suffer with anxiety in many forms and that includes adults too. 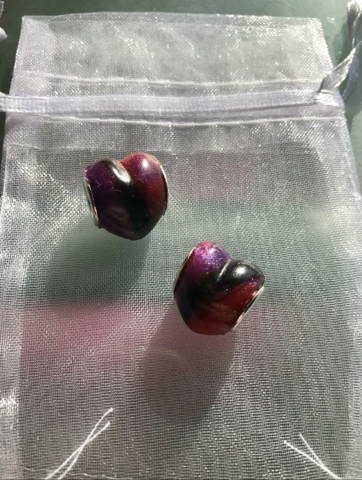 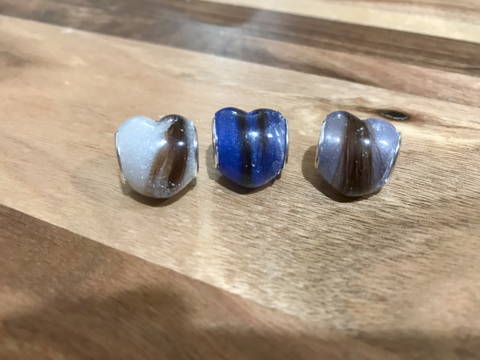 How could I fix this? How could I help my baby? How could I show him that loved him, heard him and wanted to protect him at all costs while not reverting to walking around with him in a newborn sling attached to me?

That’s when a light bulb went off in my head. He misses me. He wants to be able to touch me when he’s feeling anxious, alone and scared in some situations. So that’s what I’d give him. I’d make him some beads with my hair in them. So I did. I made 3 of them in fact. All different colours and 2 even glowed in the dark. When I'd finished I went into his room and sat down beside him and showed him what I'd made him. I explained what they were and said “These beads contain my hair, an actual part of me that has my DNA in it, the same DNA that helped to make you. I also bought you a necklace to wear them on instead of a bracelet cause that’s more boyish isn’t it?  Whenever you're at school or visiting Dad or any of the other reasons that may arise and we aren’t together and you feel all those feelings bubbling up, all you have to do is rub one of these in between your fingers and you’ll be touching a part of me. I will always be with you no matter how far apart we are. I’ll always be sitting here close to your heart.” His reaction is something I'll never forget. His tears turned from once feeling weird and broken to feeling empowered and safe. He went to school the next day and showed everyone, I mean everyone. He was so proud of them.

And so our Children’s Anxiety Beads were launched.


I should also add that he continued to wear these beads right through year 5, year 6 and only stopped because his necklace broke. Not 1 more day of crying in secret. He went back to being a carefree kid.


I’ve since made beads for other parents and their school aged children suffering in the same way but not having anywhere to turn.  The youngest being a 5 year old little girl whose schooling was being affected by this. Teachers had spoken to Mum and expressed their concerts for her and recommended she be taken out of school and to try again the following year. Mum got her a bead as a last resort after hearing about my story from a friend. Within 2 weeks of her getting her bead with Mum’s hair in it and Mum reading her the little story that comes along with it teachers were once again pulling her aside to discuss what to do next although to her surprise they were asking what changed. That she seemed settled and calmer. She was engaging with the other children and was happy. They were shocked. It was a private school and no jewellery was allowed as per school rules but this clever thinking Mum had simply pinned the bead to the inside pocket of her school dress. Whenever she needed to she just put her hand in her pocket knowing her magic Mummy bead was in there keeping her safe.


It’s stories like this that just make me LOVE my job.


I’m also an ex military member and military wife and I know all too well the emotional toll deployments and 3 months of training here and there takes on the kids of military members and the members themselves. Defence kids sacrifice so much without knowing any different. Being able to touch a bead containing Mum or Dad’s hair while they’re gone for long periods is just 1 other way these beads can help with separation and separation anxiety in kids (and adults if I’m honest).


Do you know someone who could use these beads?


We make them in smooth, honeycomb and heart shapes. Which will you choose?

Choose your wishlist to be added

We will notify you on events like Low stock, Restock, Price drop or general reminder so that you don’t miss the deal

Are you sure you want to delete the wishlist?